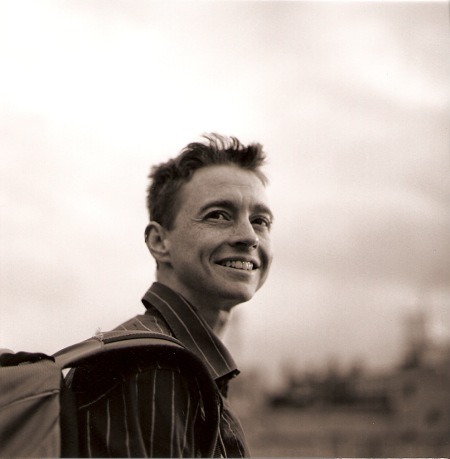 Charles Céleste Hutchins was born in San Jose, California in 1976, and splits his time between Berkeley, CA and London, England. He is a member of the board of directors of Other Minds, an organization that produces an annual festival in San Francisco.

Hutchins attended Mills College in Oakland, California, where he studied with Maggi Payne and acquired a love for the sound of analog electronics. In 1998 he graduated with a dual B.A. in music and computer science. In 2005, Charles graduated from the M.A. program at Wesleyan University in Middletown, CT, where he studied computer music and Supercollider with Ron Kuivila and improvisation with Anthony Braxton. Following that, he attended the year long course at CCMIX in France and then the Sonology course at the Royal Conservatory of the Netherlands. He is currently a PhD student at the University of Birmingham in England.

He has performed in North America – in the San Francisco Bay Area, Seattle, Canada and Connecticut – and in Europe- in England, France, the Netherlands, Germany and Austria. His music has been played on European and American radio.

He is exploring using his computer to do things that his analog synthesizer cannot do, including just intonation and granular synthesis. His most recent work involves text sound pieces with found material. He believes progressive politics and experimental music are natural allies.