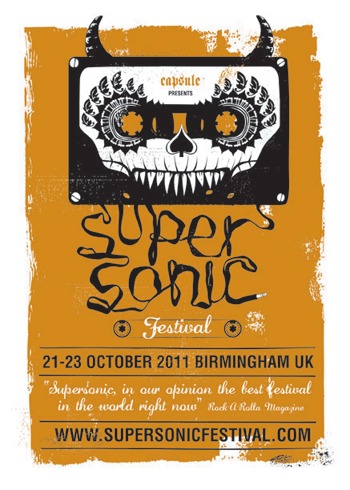 SOUNDkitchen will be transforming one of the Zellig gallery spaces into a ‘Cinema for the Ears’ at Capsule’s at Supersonic Festival. On 22-23rd October let SOUNDkitchen tantalise your aural senses with a site-specific immersive sound sculpture designed in collaboration with BEAST (Birmingham ElectroAcoustic Sound Theatre). Over the festival weekend we will bring you an eclectic concoction of sound installations, live performances and cinematic audio experiences in giant-sized portions of SOUNDkitchen recipes.

Through the moors… tracks a journey from my home in York, out to the coast of North-East England. The inspiration for the piece came after standing on a river bank in York and being amazed by the complexity of the sonic landscape and the sense of panorama I felt as the various sounds – trains, boats, people etc. – interacted. This installation extends some of my recent compositional investigations – multi-channel spatialisation, the use of field recordings and experimentation varying sensations of reality in the material used – over a longer time-span, and with a greater focus on the acoustic environment created.

Entre Terre et Ciel is a performance based on field recordings made around Azet, a small village in the middle of the Pyrenees. Three days of trekking and field recording resulted in sonic explorations on three different levels: the bottom of the Vallée d’Aure at 800m, the valley of Arsoué and Azet at 1200m and the mountain path of Azet at 1580m. The sonic environments on these three levels were dramatically different from very populated towns to deserted open spaces. This performance is the first stage in a long-term collaborative project

Iain will be performing a live, multichannel laptop set working with selected material from his sound library including raw and processed field recordings and other found sounds. For this occasion he has been particularly drawn to noise, both as it exists in nature and through man’s creation, and he intends to explore some of the complexities and subtleties of this sonic palette. He’ll be joined by Annie Mahtani who will be diffusing his set.

Shelly Knotts will perform a live laptop set surrounding the audience in a collage of sounds from the steel pan, weaving intricate metallic textures in an improvisation diffused across SOUNDkitchen’s site-specific sound sculpture. The performer in the recordings is Jenny Gilberg, British Association of Steelbands (BAS) Pan Explosion UK Soloist Champion 2008.

Throughout the weekend we will be airing field recordings and composed pieces in our site-specific immersive sound sculpture. To tie in with Capsule’s Home of Metal exhibition we have asked phonographers and sound artists to contribute material based on the notions of home and metal which will be brought together in two different installations. We will also be airing material used in our immersive listening room, created for SOUNDkitchen’s SONICpicnic in July this year.